The sublime feathers that are presented to me on my walks are the BeautyScope for today. 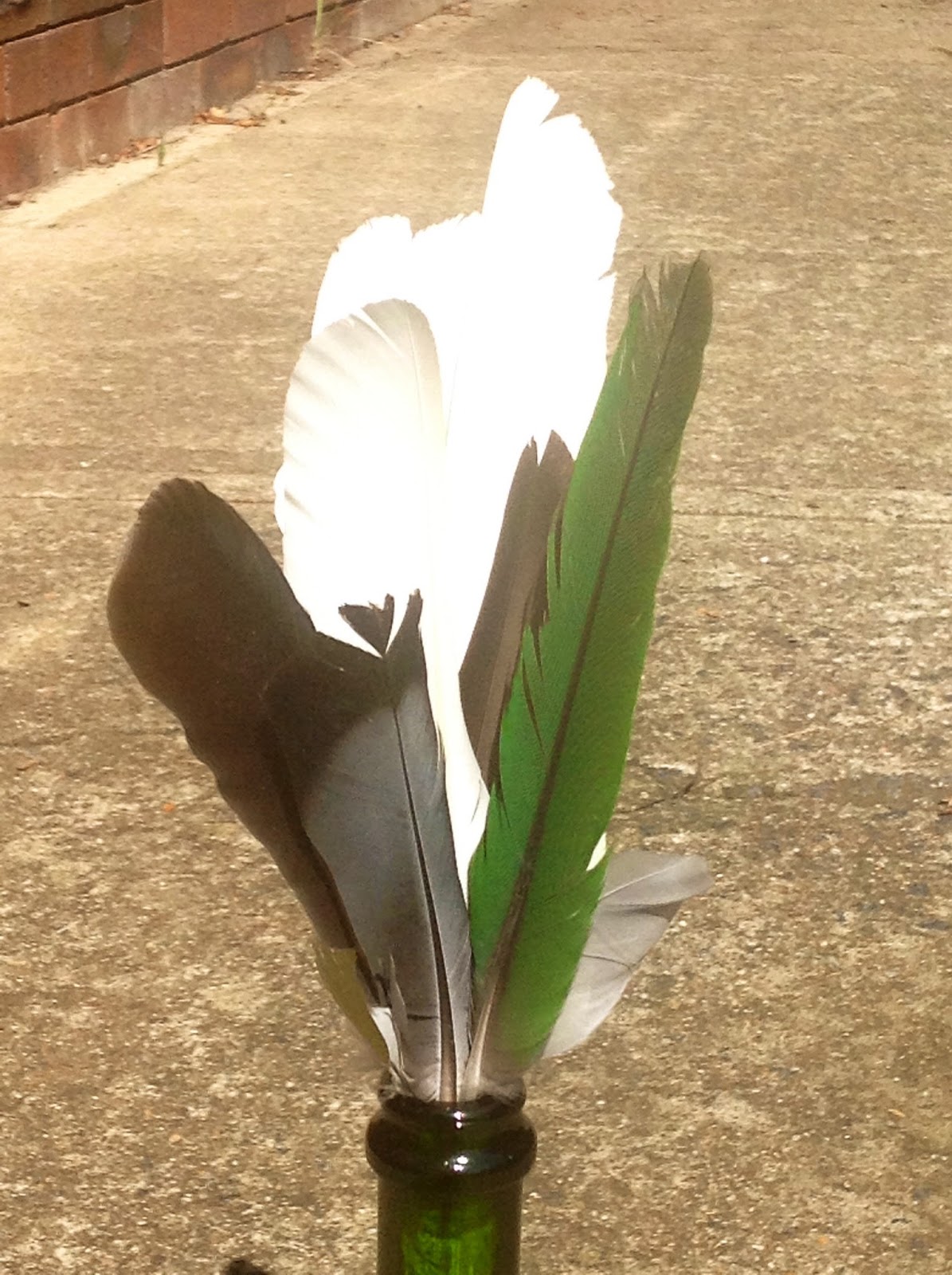 Something has gone wrong with the order of my posts, but I'm trying to ignore it :-)

As a follow up to the Aspergers post from yesterday...here is a poem I wrote after someone called me intense, when I disclosed my Aspergers. It was written to show its beauty.

Until next time,
Keep creating!

The Wonder of Singing

Welcome to my new blog!!

This is a process of discovery for me, both in my life and learning about blogging.  So bear with me as I learn to load images and arrange fonts, links, widgets and gadgets and all sorts ! :-)

So I want to start with a post about singing, which is very dear to my heart.  I often find it useful to ask my singing students to "pretend to be an opera singer!" Somehow that acting allows them to connect with their inner opera diva, and their voice changes- it becomes louder, stronger and richer. They access a part of them they didn't know existed. They have been battling to understand how to improve their voice, and then suddenly there it is. It's very exciting!

However often they can't sustain it. Once they return to the words of the song - all their inhibitions and habits return and they struggle once more.

It's like they can only allow their inner vulnerable self out when acting a part.
We have so many insecurities that hamper our ability to let our natural voice out. Singing is so personal because you are the instrument. If you're having a bad day, your instrument is having a bad day!

Singing is so freeing when we give ourselves permission to let our inner self rip!
It's also like meditation - controlled deep breathing, feeling vibrations through your body, and focussing on one thing (producing a beautiful sound) to the exclusion of all else. There is a sense of release...Ahhh!

I wrote this poem which seems to encapsulate what I'm trying to say.

When I sing
my heart unleashed
from those cutting hurtful
chains of scruples
stands exposed
for your scrutiny
AND GLORIES IN IT!
2 comments:
Email ThisBlogThis!Share to TwitterShare to FacebookShare to Pinterest


I want to share something personal with you, as I have now been blogging for a little while.

Two years ago, I had an amazing experience. I was diagnosed with Aspergers Syndrome which is one stop on the Autism Spectrum. This finally explained the many unexplained challenges I have faced all my life.
But over the last two years, whenever I mention my diagnosis to others who have known me for a while, their response is...I would never have guessed. Maybe you can be a little intense, but that's all!
And when I mention some of the symptoms I deal with day to day, they often say...oh that's normal, everyone feels like that sometimes.
So does this make me feel good? No! It seems to negate all the difficulties I have. I feel like an idiot because I can't control something that others can easily cope with.

Having thought this over, I think the truth is that we older women Aspies have managed to learn to copy others so well, we can camouflage our symptoms, so we just seem a little quirky. Often we are paddling like mad underneath, trying to just stay abreast of the world.

I also think our symptoms lead out from normal symptoms on a continuum. They are just extreme versions of normality. E.g. Everyone finds the supermarket difficult, and they want to scream by the end of shopping...but not everyone has to block their ears to keep out the incessant music and announcements and people's conversations so they can remember what they were supposed to be buying. Not everyone's brain is so overwhelmed by the visual cacophony on display that they phase out or burst into tears.

When people make these supposedly supportive comments we often feel negated and dumb and belittled.
I suppose I should see it as a compliment that others don't notice my struggles. But it often just feels like they are calling me a liar, someone trying for attention.

The other tricky thing for me is knowing when to disclose my diagnosis to others. Will they think I'm retarded, will they take me seriously, will it help in any way?

Some of the difficulties I have involve being sensorily overloaded, so I end up tensing to ward off whatever I am dealing with. Often I end up exhausted by the end of the day, due to my bodily tension.
This means I find it hard to commit to things, as I won't know until the day whether I will have the resources to do it.
I have to prioritise my family so they get the best of me, and then one or two extras like helping with craft group at school, and teaching singing from home. Then anything else like catching up with friends, helping further at school, or helping out with voluntary organisations I'm involved with, have to wait for the energy resources. And I certainly can't hold down a full time or even part time job.

It's hard to know when to tell people, sorry I can't help out, not because I'm lazy, just because I have an invisible disability. I don't want to seem like a drama queen!

I tiptoe along a tightrope of commitment, constantly making decisions about my ability to cope.
If I make the wrong call, I tip to one side madly scrambling to gain equilibrium. Commit to too many tasks, and I could end up a day later flat on my back with neck and headaches and feeling nauseous.
Or I could be so jumpy, with my senses so stretched, that all the sounds in the world seem suddenly amplified.
All my tasks seem impossible to organise and with my brain reeling and feeling out of control, all I can do is scream at it all.
It is often only then that I notice what is happening, due to habitually living in a minefield.
I only notice how rabid I've become when I hear myself shouting, and so I shut myself away in my room under my weighted blanket and pray I've done no lasting damage to my family.

I don't want to end on a negative note. There are many positive things in my life and I don't think I would be nearly as competent or enriched if I didn't have my Aspie focus (obsession)!
I have music with the piano and singing because I used to disappear into these worlds to escape.
I am competent at many art and craft practices because my attention to detail assists me.
My senses which are so finely tuned bring me many beautiful moments which I can share ...hence BeautyScope :-)

6 comments:
Email ThisBlogThis!Share to TwitterShare to FacebookShare to Pinterest

A blurry photo, but what colours!

Nestling in the mulch...

This is the first in a series of (hopefully) daily posts entitled BeautyScope...beauty seen through my "scope". Finding beauty in the minutiae of every day, utilising my propensity for detail! And encouraging me to make art every day.

Imagine the scene. The sun is glaring down, and you can feel your unprotected skin heating up. There is a gentle hum of industrious insects at the periphery of your hearing, surrounding you. The wind is a gentle ripple on the leaves, and the divine scent of roses is filling you, feeding you, making you float on soft perfume.


Here are some more photos of the roses from my trip to Old Parliament House Rose Gardens.

﻿﻿
﻿﻿
The interesting thing about these two rose posts, is that as I have been moving the photos around, I could swear I caught the scent of roses! Double the experience...not bad!

So that's all the roses for today. Hope you enjoyed the rose garden reprise.

Until next time,
Keep creating!
2 comments:
Email ThisBlogThis!Share to TwitterShare to FacebookShare to Pinterest

a rose by any other name would be debauchery

Last weekend my son The Artist's class had a social in the House of Representatives rose gardens at Old Parliament House in Canberra. Whew that's a mouthful! 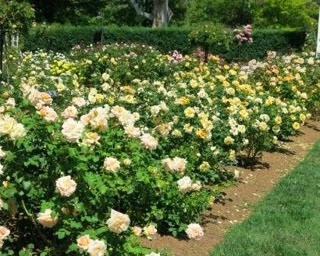 I enjoyed wandering the gardens and having a peek at the signs. 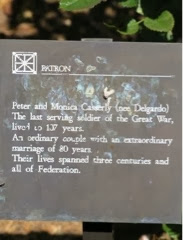 From this amazing life... 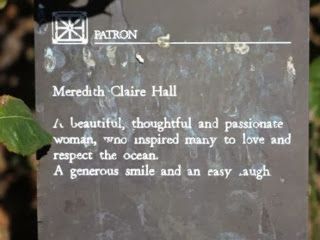 ...to this wonderful epitaph..hope mine will be as nice! 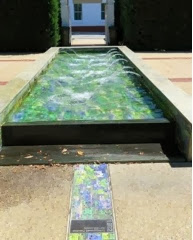 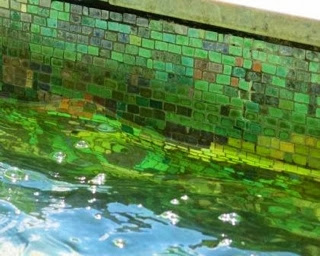 I love the abstract images formed at water's edge 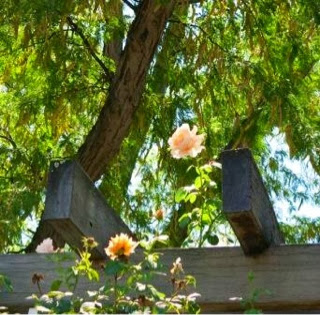 Arching over the rose gardens were these gorgeous Gleditsia trees 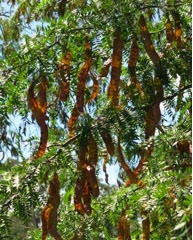 full of seed pods, which rustled and rattled in the wind.

There was a wonderful soft litter of rose petals on the ground. 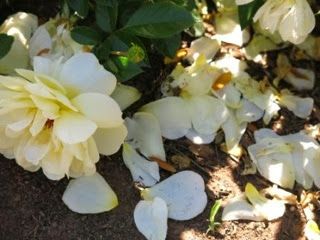 And the bees were very busy in this larder of theirs 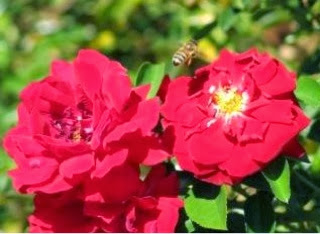 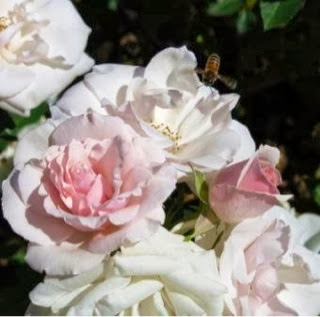 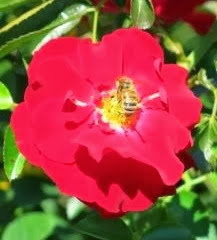 They only have one thing in mind, and they won't be deterred from it!
While there I was overcome by the scent of the roses, and produced this poem for your enjoyment!

One for every day...

I have never been much of a shoe person...feet too hard to fit! And I didn't really think I went overboard for any item of clothing, except perhaps scarves, which I can never throw away. Which are so small, take up no room, and could be made into something else like a lingerie bag (which I did do this last Christmas!)

But I have been going overboard a little with jackets lately, so I decided to count them... 31! That's right, you heard correctly...31!! One for every day of the month. I could wear a new one every day for a month and never repeat myself. I was flabbergasted! 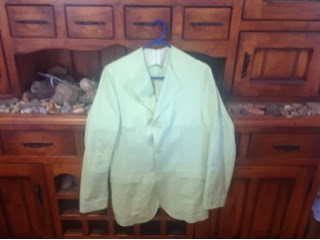 the linen jacket I bought secondhand which was slightly too big, so I took off the collar and reduced in size to fit, 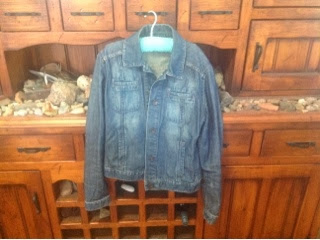 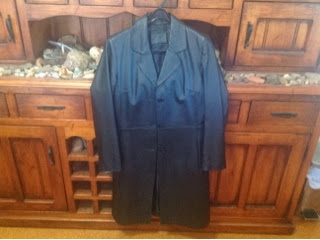 to the leather coat I can't let go even though it creaks madly, 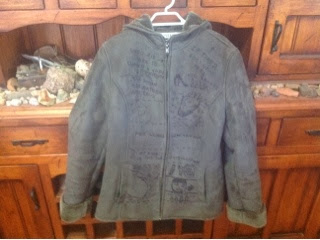 and the faux sheepskin that my son The Artist drew cartoon figures on at my request...so cool.

Here is a sample. 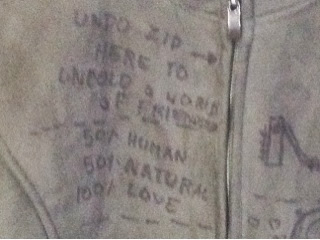 Some more pieces of The Collection : 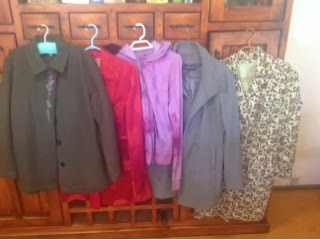 I just realised I didn't count my dressing gowns, one of which I am dying to wear as a coat...leopard print you know!

And I forgot to count the black velvet dress i was bored with, so I cut it up the middle to make a coat because I didn't have enough...!

Oh, and speaking of collections, the backdrop is my other son The Actor's rock collection...and each one is precious. Wo betide any mother who tries to move them on!

Do you have a weakness? What item of clothing is your Achilles heel? what do you collect slightly obssessively?