Mining the archives once again.
Here are some buildings and structures from PNG.
Our first house in Wewak - note the wooden louvres. (I am on the left) This was opposite a sawmill that screeched! 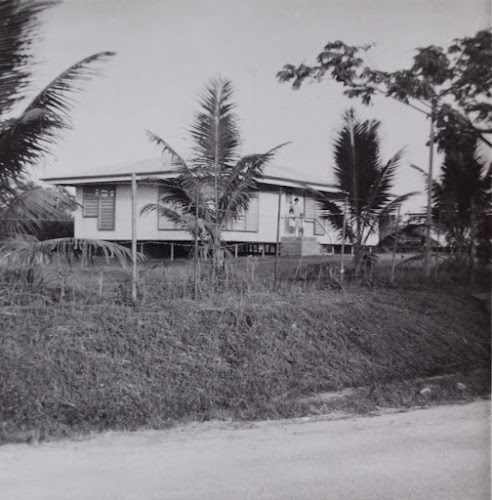 Our house in Mt Hagen (back door view). Note the gas bottles and the noose for the banana branch hanging from the eaves and the security mesh on the windows. I remember camping on that square of lawn in a homemade tent out of bedspreads and safety pins. Also practising highjump with my sister with that tiny run up. 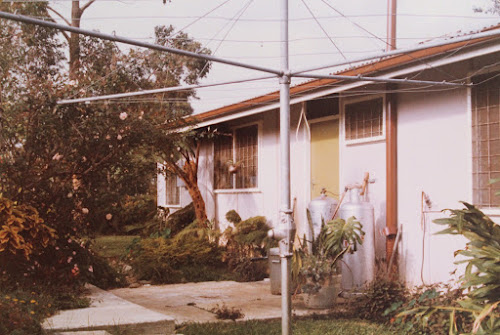 Natural timbers and vines carry you over the river! Surprisingly sturdy. 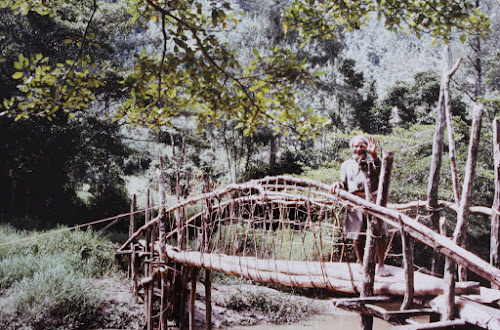 From the sublime highly crafted PNG High Commission in Canberra based on the Haus Tambaran... 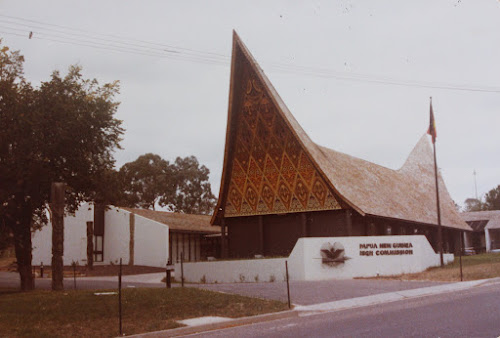 ...to the amazing Smugglers Inn entrance in Madang 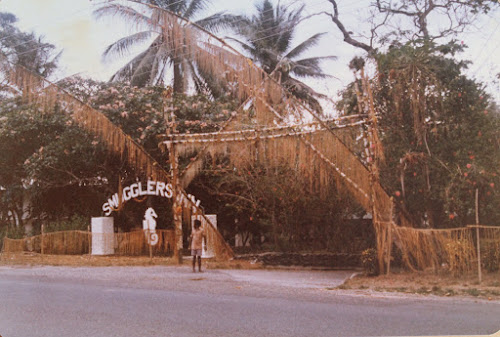 Do you have a favourite?

8 comments:
Email ThisBlogThis!Share to TwitterShare to FacebookShare to Pinterest 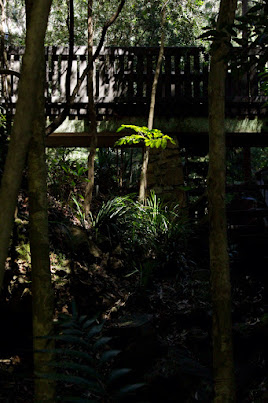 and you are seen

4 comments:
Email ThisBlogThis!Share to TwitterShare to FacebookShare to Pinterest 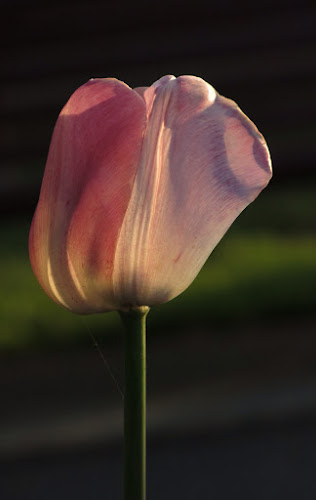 for the last of Summer's light

7 comments:
Email ThisBlogThis!Share to TwitterShare to FacebookShare to Pinterest

Recently I received THE pink bloxing gloves from Ally of Shybiker.

These gloves have been everywhere man. Used to express various ideas of femininity.

I thought I would have a go at adding my two cents.

This time I thought I'd explore in the Australian National Botanic Gardens with Mr Actor being the photographer.

I wore my most feminine dress, with a more masculine shirt and Bushy's Akubra hat.

Arrived at the gardens. 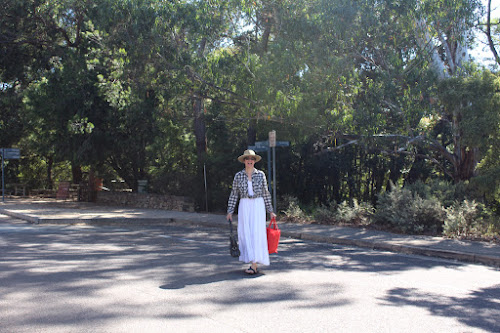 Little did we know a surprise awaited us. 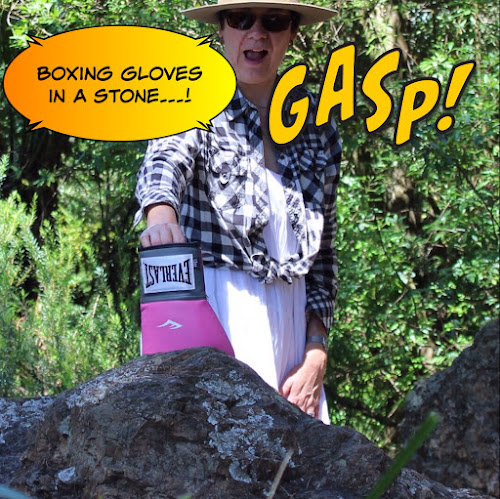 A note explained that there was an invisible monster on the loose and whoever could draw the gloves out of the stone would have to fight it.
Who will do this daring deed?... 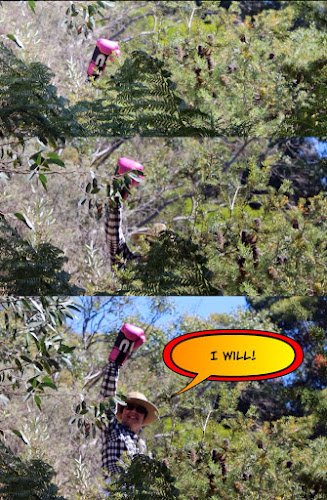 After a short amount of coaching it was into the fray! 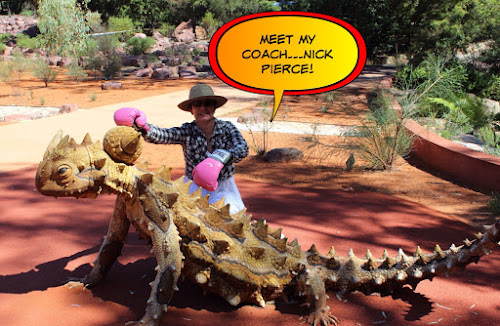 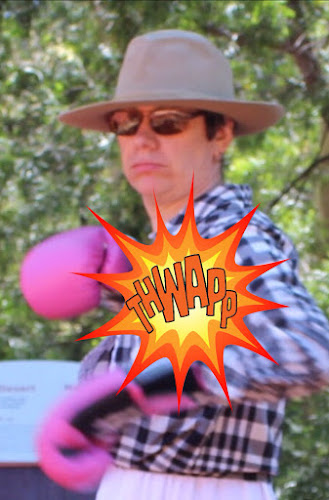 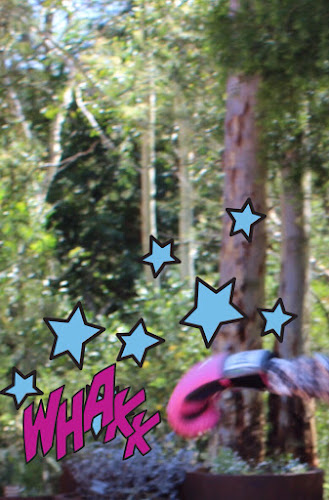 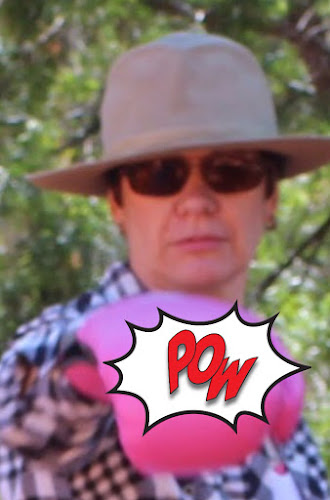 The match was on. But oh dear, it soon turned sour as my inexperience told against me.
It was all... 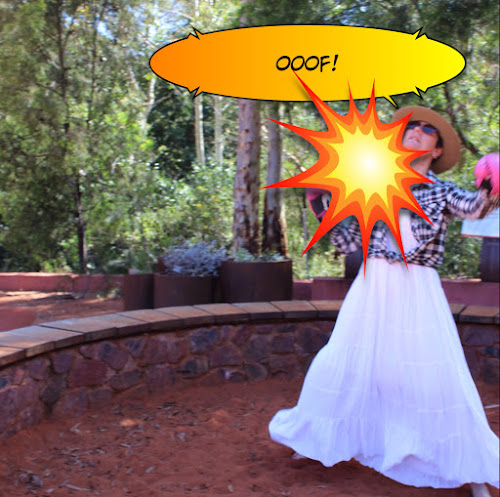 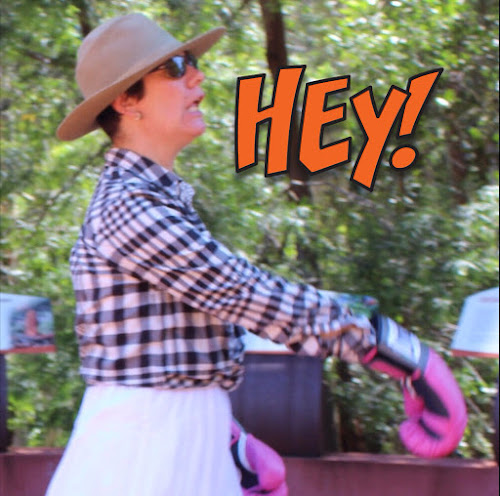 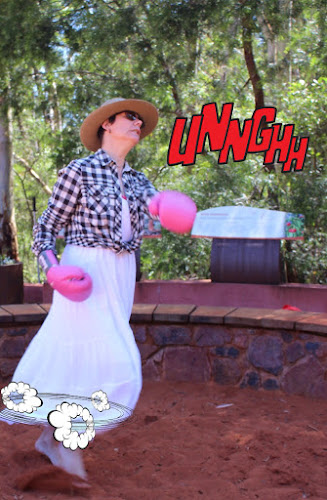 But with a mighty heave... 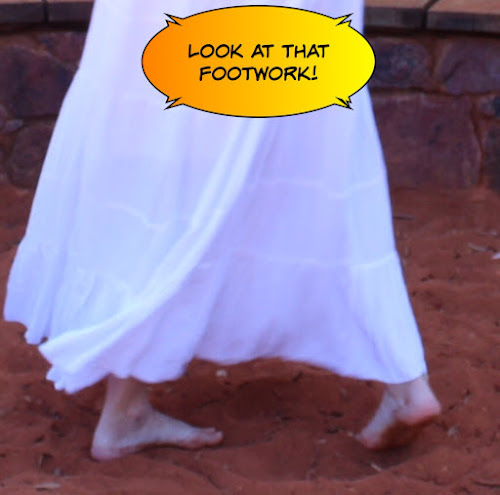 The tables were turned. 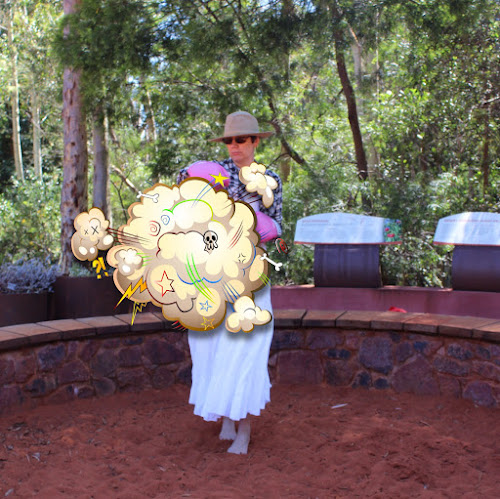 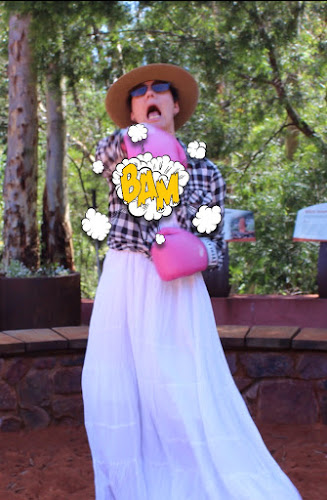 And not a moment too soon. 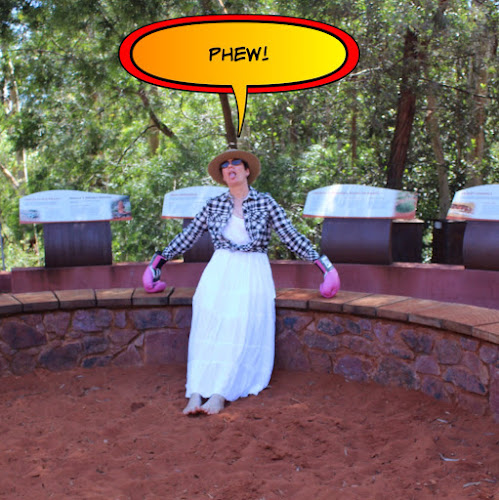 Of course afterwards there were press shots to take showing my glamorous side. 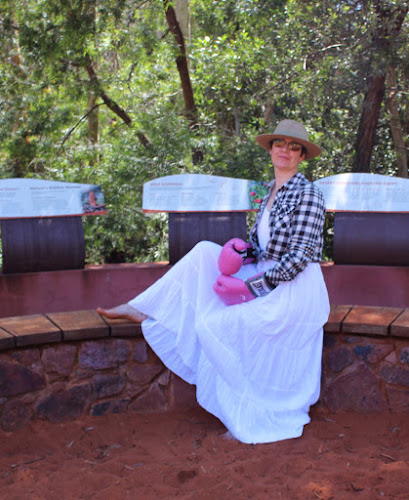 After which I could leave with a clear conscience knowing the gardens were safe once again for all! 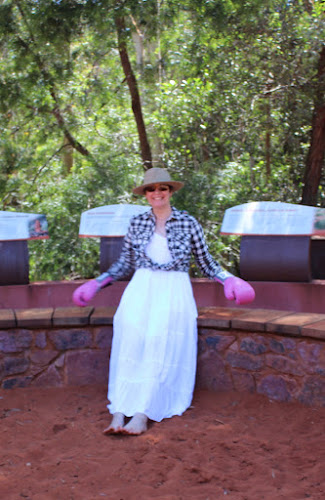 I was exploring the stronger and the softer sides of femininity in a visual manner.
Thanks so much Ally for allowing me to play and sending the boxing gloves all across the world!
I hope they enjoyed their second visit to Australia.
This took place in the Red Centre section of the gardens where they have recreated the growing conditions of the red centre of Australia.
My dress and shirt were both thrifted.
Til next time, keep on creating!
Love,
Jazzy Jack

PS Feeling very visible so I'm linking up with Visible Monday over at Not Dead Yet Style. Patti is also wearing black and white!

Also linking with Not dressed as lamb - #iwillwearwhatilike The theme is pink /red which is appropriate! Come and see pink and red and orange together...yeah!

22 comments:
Email ThisBlogThis!Share to TwitterShare to FacebookShare to Pinterest

Write and link #7 - Love is a funny word

Greetings! Thanks soooo much for all the supportive comments on my last post. The first week went well as long as I didn't try too hard and let it flow.

Anyway, a little early for Valentine's Day, I present my poetic offering for Natalia's Write and Link #7.

She has a topicless month this month but if you need a topic has provided "Love is a funny word..." 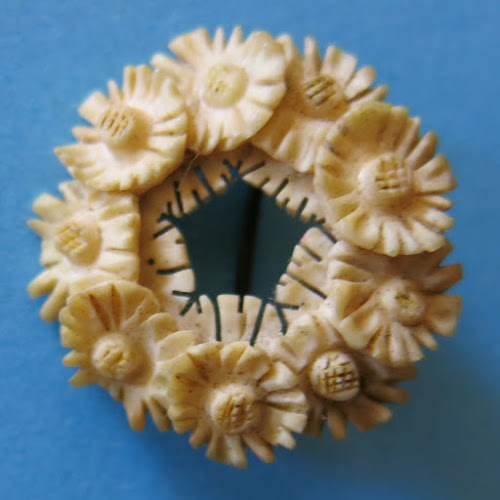 love is a funny word

it has many words

and many worlds also

love can be vague

clouds in the head

wraps me in rosé

love tops me up with butterflies

when there isn't a joke

love is a funny word

Don't forget to pop on over to check out the other writers at the end of February when it closes. And if you feel so inclined, please join us!

Til next time, keep on creating!

PS Also linking up with Creative Mondays because I love to create and celebrate creating. Claire is celebrating Valentine's recipes so we are on a similar page! Pop on over to see many creative souls.

6 comments:
Email ThisBlogThis!Share to TwitterShare to FacebookShare to Pinterest

We have started homeschooling officially for the year! Sooo we went to the pool...because we can.

Not sure how much blogging I will be doing, and certainly will struggle to comment, so apologies in advance. But I'm keeping up with my reading and keeping an eye on all your doings :-)

I noticed Hat Attack is on again over at Judith The Style Crone. So I thought I'd share some amazing headdresses from PNG. 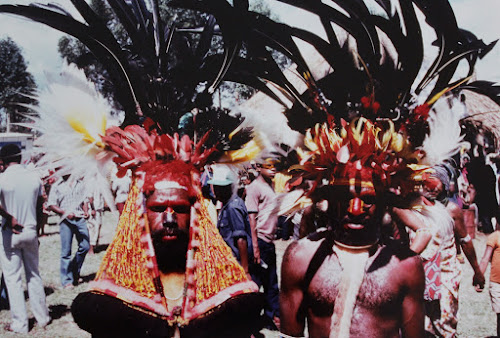 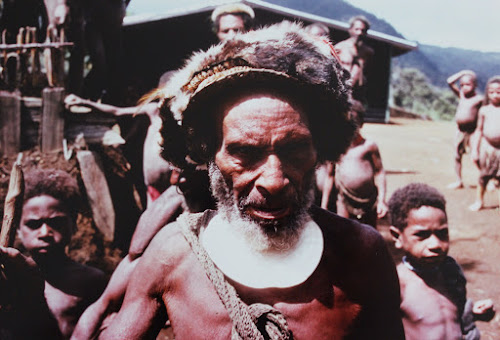 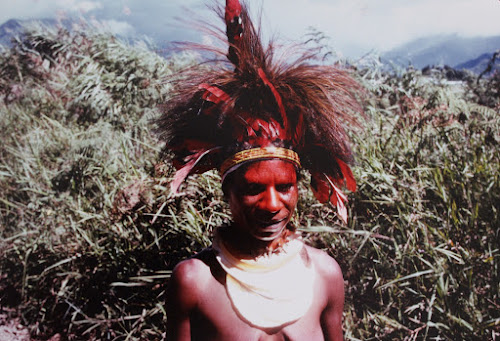 Note the pan flute and the kina shell necklaces. Their money is now called kina (dollars) and toea (cents).

Don't forget to pop on over to The Style Crone to see the other hatted beauties. Judith is in a particularly fetching leopard print hat and gaunlets.

Til next time, keep on creating!